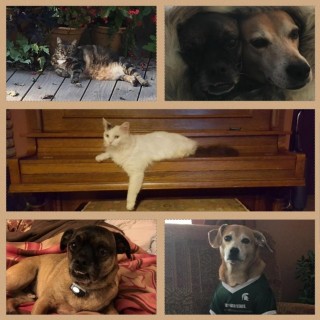 I began my veterinary career early by helping out my local veterinarian in Haslett, MI beginning in 8th grade and continued to work with him for the next 8 years. My interest was small animal, but in veterinary school and for a couple years afterward, I did both large and small. Currently I work with both small animal and wildlife.

I received my Bachelor of Science from Michigan State University in 1980 and graduated from MSU in 1984 with my Doctor of Veterinary Medicine.

The joys of my life, other than being able to work in veterinary medicine, are my two daughters, Halley and Maris, who are both grown and on their own now, and a menagerie of pets including three dogs, four cats, and a plethora of wildlife. 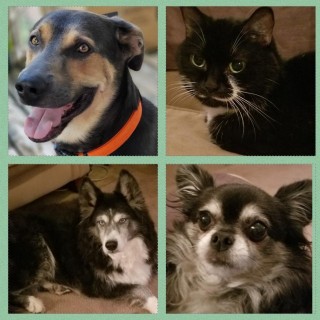 Kelly has worked in the Veterinary field on and off for 35 years. She first worked at Countryside as a veterinary assistant when Dr Kutchins opened with her mobile house call practice, then again here at the clinic from 2010-2013, and returned in the fall of 2018 as the Office Manager. Obviously this is the career for her as she keeps returning!

Kelly has one son and 3 adorable grandchildren. Her pets include 3 dogs (Clodaugh, Hank & Rita) 1 cat (Malibu) & a turtle named Turbo. Outside of work Kelly enjoys spending time with her grandkids, lake living & soaking up the sun out in her boat. 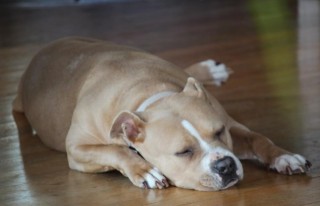 LeAnn came to work at Countryside in the fall of 2018. She has been a Licensed Veterinary Technician graduating from WCCD in 2007. She then attended the University of Tennessee to become a Certified Canine Rehabilitation Practitioner, completing that program in 2009. Her love for helping animals has been a lifelong commitment. Her areas of interest include surgery, orthopedics, post surgical rehabilitation, pain management, and animal behavior. At home she enjoys horseback riding, photography and spending time outdoors with her family. 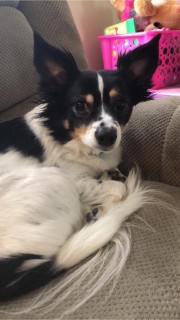 Megan has been working at Countryside for 3 years as a Veterinary Assistant, She’s always had a love for animals since she was young. Megan worked at the Lenawee Humane Society before coming to Countryside, her areas of interest include surgery, and animal care. Outside of work Megan enjoys spending time with her 2 daughters and being outdoors. Megan has 2 cats, 1 dog, a guinea pig and a goldfish! 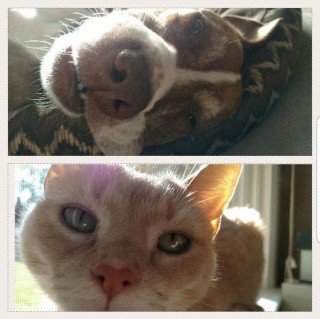 Lyzz has been working with animals since she was a little girl. One of her first memories is trying to free the salamander from her preschool science camp because he looked sad. Moving on to trapping “feral” cats in her neighborhood throughout elementary school and in junior high she quickly gained popularity in her community for reuniting owners with their “stray” dogs. Albeit misguided at times, there has always been a passion for the well-being of both her community and animals. As time moved on Lyzz continued to work within her community at the boys and girls club of Lenawee while becoming a first time foster failure.

In 2014 Lyzz finally took the plunge and began working full time with animals. She took the position of interim shelter manager at the Lenawee Humane Society and held that position for a little under a year. During that time Lyzz made the tough decision of becoming a stay at home mom for her first child. In February of 2018 Lyzz began working part-time as a veterinarian assistant at Countryside. On her off days Lyzz enjoys working at Needle-Lane farm in Tipton where her daughter can run wild and eat like a very hungry caterpillar. On the weekends Lyzz attempts to pamper her senior pets and allow them to have the best golden years possible. 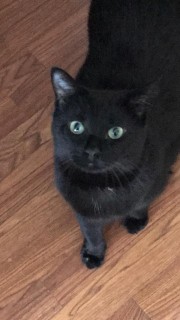 Hello, I am Jessica. I have been part time at Countryside for about 7 years now. I started when I was in highschool by volunteering. It also helped that I have known Dr. Lisa since I was about 5 years old. I now have been working full time for the University of Michigan as a medical assistant mostly with pediatrics for about 2.5 years.

I have a black short-haired cat named Max, I got him from fostering him and his 2 sisters when he was about 3 weeks old. I also share a Rottweiler with my parents, her name is Jada and she is about a year old. I have had a lot of different animals that I have helped. One year I found a snapping turtle about the size of a half dollar and kept it until it was ready to be released the next year. I have fed baby mice by eye dropper before, bottle fed kittens, and fed baby bunnies, etc.

Outside of work, I love being outdoors in the summer, hanging out with friends and family. I absolutely love being in the water so being on the lake or at the beach tanning is so relaxing. I love traveling, especially if I’m visiting family. I haven’t been camping in years but would like to find the time to do that again. 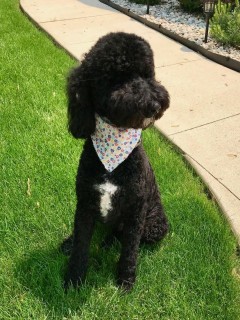 Vicki first came to Countryside after retiring from the University of Michigan in 2015. She had always wanted to work at a veterinary hospital and has always had a love for animals, so for her, this was her dream job. Vicki left for a few years to care for family members and was able to return in October 2018.

Vicki has four dogs, Jimmy, Joey, Izzy and Sydney, and a Himalayan cat named Freckles. Outside of work she enjoys spending time with her friends and family. Vicki has 2 daughters and 3 grandchildren and cares for her elderly mother. Her hobbies are gardening, knitting and crocheting. 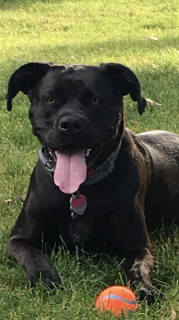 Hi! My name is Sandy. I’ve been in the veterinary field since 2002. Animals have always been a passion of mine, I love them all big and small. I currently only have 3, 1 dog and 2 cats, which is the smallest farm family I’ve had in a long time.

When I’m not loving on animals I enjoy being outdoors and trying to keep up with my two very busy teens. 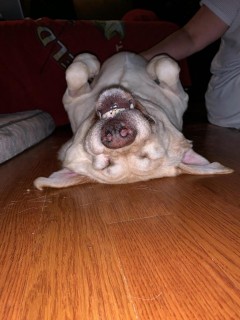 Hi, I’m Emily! I have had a passion for animals ever since I was a little girl. I have had animals all my life and couldn’t imagine a world without them. Currently, I have two cats, one dog and four ducks. I realized I wanted to start working with animals when I started watching veterinarian shows on TV. I started by working at pet supply stores and then working my way up to a kennel/day care attendant. I started at Washtenaw Community College in the fall of 2018, while at school I was part time receptionist at a small animal and exotic animal hospital. I’m driven to move up in my career, along with being a veterinarian receptionist I have started at Countryside as a veterinarian assistant.

Holiday Considerations for Your Pet: Seeing The Holiday Through Your Pet’s Eyes 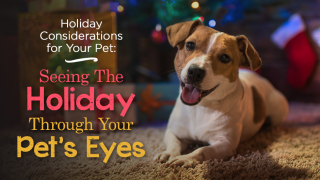 When you see the holiday through your pet’s eyes, the big guy in the red suit may seem kind of frightening. And that’s not all - the home filled with scents of tasty but possibly unhealthy and dangerous foods, the noise of the door opening and closing as guests arrive makes their hearts race, strangers scare them, and ornaments look an awful lot like toys. Plus there’s the tree - which looks like an indoor bathroom to your dog.

Make the Most of This Summer: Safety Tips 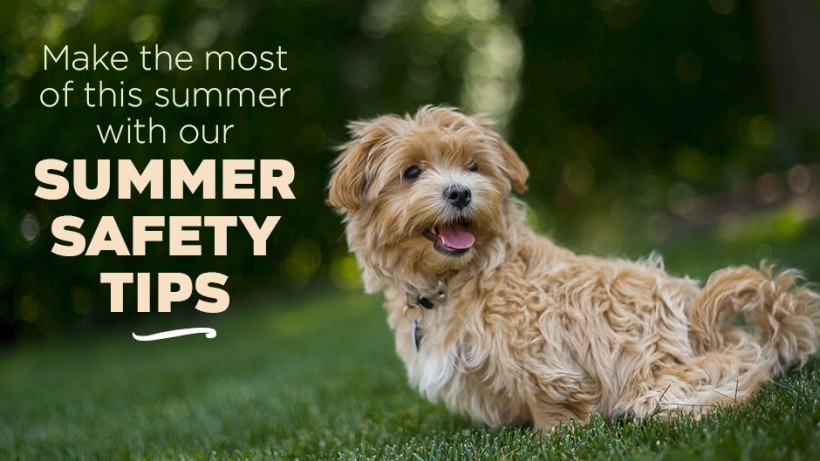 Summer is the best season to be a dog! The sunshine and great weather lead to endless possibilities of fun outdoor activities. From doggie paddling on a beach summer vacation to leaping through the woods, summer is dog-gone fun! 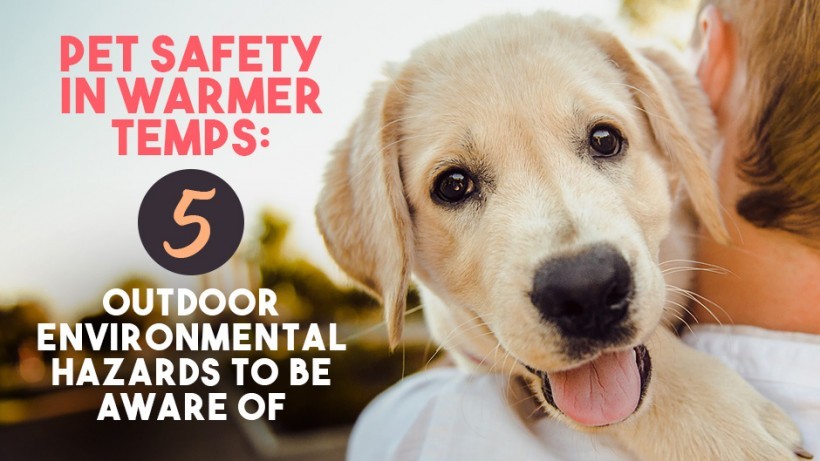 As a pet owner, you look forward to the warmer spring weather because it means you can finally spend more time outdoors with your furry friend. Unfortunately, it also means more exposure to environmental hazards for your dog or cat. This requires awareness of these dangers and active steps on your part to help your pet avoid them.